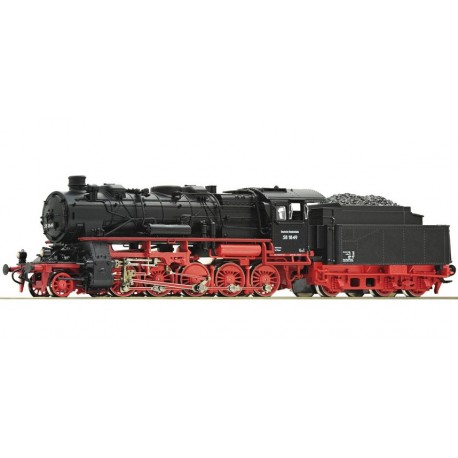 The type G 12 is based on the locomotive type G 12.1 that the company Henschel had developed for the Turkish Railways. Prussia took over this construction and procured a total of 1168 machines until 1921. This powerful locomotive type used for freight train services was not only the basic concept of the later standard types of the German Reichsbahn, it may even be considered as the first standard locomotive. In addition to Prussia, the railway administrations of Baden, Saxony, Wuerttemberg and Alsace-Lorraine had also decided to procure the bullish three-cylinder machine. With the lane number 15 000 had the company Henschel in August of 1917, the first G 12 with the train no. 5556 delivered to the executives of the KPEV. The construction and building of 1479 locomotives involved 13 locomotive factories. Baden had 88 machines built and took over 10 more from Prussia, Saxony procured 42, Württemberg 43 and Alsace-Lorraine 118 locomotives. For the use in the Saxon region, the Reichsbahn finally put another 20 locomotives into operation. After the merger of the Deutsche Länderbahnen most locomotives became part of the vehicle parc of the German Reichsbahn. The machines from Baden received the running numbers 58 201-225, 58 231-272, 58 281-303 and 58 311-318, those from Saxony the numbers 58 401-462 and those of the Württemberg State Railways featured the running numbers 58 501-543. The numbers 58 1001-2148 were reserved for Prussian locomotives. The 58 1001, however, was still a machine that was originally intended to operate in Turkey, but due to the war it was no longer delivered. In the beginning, all locomotives of the class G 12 had mounted the three-axle tenders of the pr 3 T 20. Some machines were later coupled with the larger tenders pr 2'2 'T 31.5. In the late twenties and then again after 1950, various locomotives and tenders were converted to coal dust firing, but were only used in this design for a few years. Around 480 machines remained in the Federal Republic after 1945 and about 435 units operated for the German Reichsbahn in the GDR. By the year 1954, the Bundesbahn had scrapped all locomotives of the class G 12, while in the GDR operated still some machines until the spring of 1977.
Details
Downloads
Spare parts
General data
Number of axles with traction tyres
2
Number of driven axles
3
Coupling
NEM shaft 362 without close coupling mechanism at the tender
Minimum radius
358 mm
Flywheel
no
Electrical
Motor
5-pole motor
Interface
No
Head light
Direction dependent dual headlights
Measurements
Length over buffer
213 mm