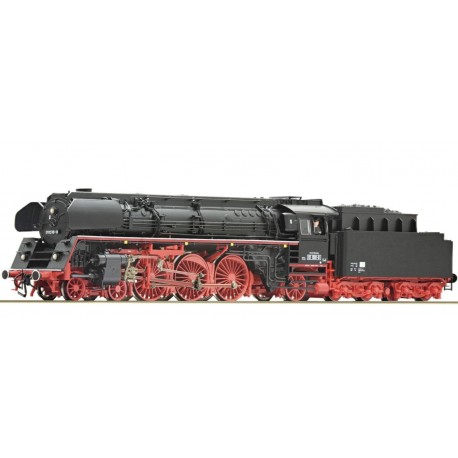 Steam locomotive 01 1518 of the Deutsche Reichsbahn.

The Deutsche Reichsbahn feared that it would not be able to provide sufficient locomotives for the express trains due to the partly poor condition of the 01 series. Therefore the DR decided to redesign the class 01, which for the Reichsbahn also meant an improvement in performance and the elimination of technical problems, and it worked out brilliantly. The new welded boiler got a third safety valve, all boiler superstructures received guards, the driver's cab was modernised and the Witte wind deflectors were bevelled at the front. When the locomotives with coal firing were redrawn in 1970, they were classified as series 01.15. The last station of the 01 1518 locomotive was Saalfeld. It was taken out of service in May 1981.
Interior fitting
Driver's cab
Coupling
NEM shaft 362 with close coupling mechanism at the tender
Minimum radius
419 mm
Number of axles with traction tyres
2
Smoke generator Article number (digital)
Seuthe no. 11
Number of driven axles
5
Smoke generator retrofittable
yes
Flywheel
yes
Electrical
Interface
Electrical interface for traction units according to NEM 652 standards with plug-in fixture
Head light
Both sides of the vehicle are equipped with direction dependent triple headlights.
Digital decoder
NEM 652
MX645R
Sound
yes
Measurements
Length over buffer
281 mm